A film director has to have the sensitivity of a poet and the stamina of a construction worker. The trouble is that rather too many of us get it the wrong way around.

Filmmaking is rarely glamorous. Being ankle deep in pig shit every day is the reality.

Directing is a crash course in megalomania. After having a hundred people obeying your every whim all day, it’s hard to go home and be normal.

Filmmaking is undoubtedly an art form, but you can’t ignore that it’s a highly technical medium and requires great mental and physical strength. I’ve often thought that the worst problem Michelangelo had when he painted the Sistine Chapel ceiling, once he figured out how not to spill the paint, was backache.

Making films we’re forced to live a gypsy life. Ever since we filmmakers decided to abandon the comfort of the studios for the reality of the streets, we committed ourselves to a nomadic existence and a life of anonymous Holiday Inn motel rooms.

I have total admiration for film crews. They are the true heroes of the filmmaking process, not directors or actors. Film crews are mostly spectacularly generous and competent, enduring long, upside-down working hours, often in miserable conditions, far from home — illness, alcoholism and divorce are rife. (When a technician has done a gruelling fourteen hour day, the hotel bar looks very attractive, as does the costume designer’s assistant.)

Or: I love Mickey Mouse more than any woman I have ever known.” Walt Disney

Filmmaking is a collaborative art form. No filmmaker in history ever made a film on his, or her, own. Let’s face it, even Leonardo needed a little help painting The Last Supper, but Federico needed a hundred people to help him make La Dolce Vita. 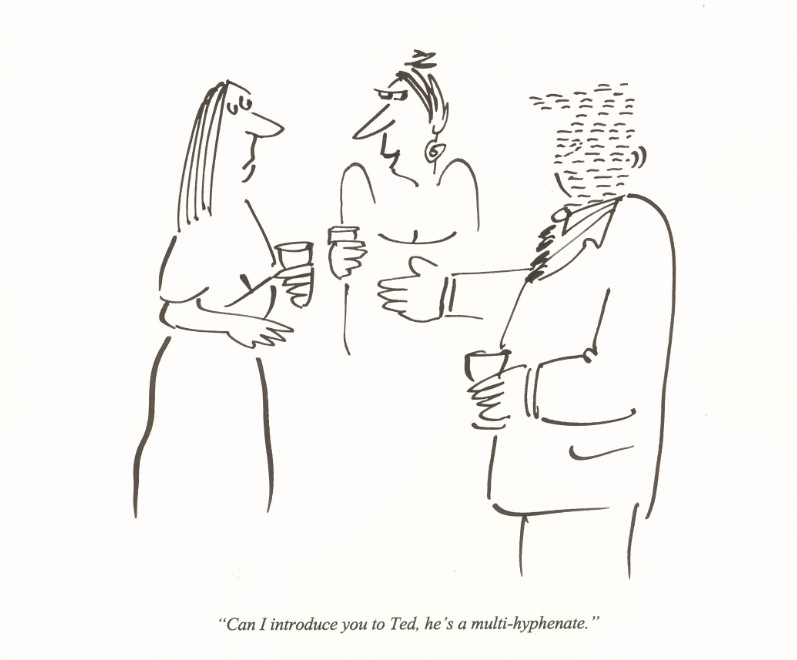 As a director, first and foremost, you should always be truthful to yourself — to what you are trying to say and how you choose to say it. But a film doesn’t exist in a film can. It only exists when it flickers on the screen and an audience experiences it. So how can you ignore the tastes, emotions and expectations of all those people sitting there in the dark?

The moment you start a film you take a deep breath and leap off into a big black hole of uncertainty and doubt.

There comes a point in making a film when you are convinced that it will never work and never end. And then you squeeze your eyes together and suddenly you’re at the wrap party.

It’s just as hard to make a bad film as a good one and no one sets out to make a bad movie.”
Or: “I aim at the stars, but sometimes I hit London.” Werner Von Braun

Many directors talk a good film and make bad ones

I had no real ambitions to be a film director. I started directing when I was 24, making commercials in the basement of the advertising agency (CDP) where I worked as a writer. The art director did the lighting, someone else operated the camera and someone else the tape recorder. I was the only one who couldn’t do anything. As I had written the script, they suggested I said “Action”. From that moment on I was hooked.

There’s a sort of Kamikaze feeling when you set up your first shot on your first feature film. Let’s face it, it’s not a business that accepts failure. You only get one chance to screw up.

It’s always been important to me to try different genres. But writers on film like to pigeonhole you. I suppose, depending on whether people like or dislike my films, I either have an extraordinary wide range as a filmmaker, or no focus whatsoever.

The French had the theory that a director makes twenty versions of the same film throughout their career. If you defy this notion of  ‘thematic fidelity’, then it’s almost heretical.

Filmmakers are always suspicious of being categorised and put into pigeon holes invented by writers on film. It’s the vocabulary of description, not creation.

I think that to keep creatively fresh it’s good to examine stories and characters, set in places you’re not familiar with. You hope that the fascination and wonder you have during the journey of discovery, in preparing and shooting a film, can be imparted to the audience.

Or better put: There is wisdom in turning as often as possible from the familiar to the unfamiliar: it keeps the mind nimble, it kills prejudice and it fosters humor. George Santayana

I’m probably braver now than when I first started directing. I was 24 and wonderfully naïve, which is no bad thing because it frees you from any sense of danger. The older you get, the more you know and the responsibility weighs heavy and the hazards, perils and pitfalls are more evident — and so, ironically, you have to have more courage as you get older.

You make three films. One when you write it, one when you shoot it and one when you cut it together in the editing. With luck they are not too dissimilar from one another.

I’m not averse to the Stalinist approach to filmmaking. Just as long as I’m Stalin.

On set, good filmmaking is about momentum. Interrupt that momentum and the work, on set and on film, becomes laboured.

Making movies, momentum is everything. Nothing interrupts the momentum of a film faster than, child actors, animal trainers, dud special effects, actors who can’t remember their lines and the interminable tinkering of a nervous cinematographer.

Nothing creates the mood for a scene as fast as the weather in which you shoot it.

As you get older the gaps between films get longer. You get fussier and it’s easier to say, “No” than, “Yes” to a project. Also, truthfully, it’s a very physical job and the thought of being up to your ears in Mississippi mud for three months has less of an appeal than when I was younger.

I can’t say my life is dominated by film. If I find myself at a film festival and surrounded by erudite film conversation about Angelopoulos and Haneke, my eyes light up at the mention of Fabregas or Thierry Henry.

Life is not a film set. When not making a film it’s advisable to get on with your life. After all, if you don’t live a life, how can you make films about life?

I agonise over each new film that I do — usually reacting against what I did before. On average, a film will take up two years of your life. It will consume your every day, seven days a week, so you have to be sure you’ve chosen the right one.

Making a movie has been likened to climbing a mountain — so sometimes, it’s better to quit in the foothills than to die on the slopes.

Or: “If you dig a hole and it’s in the wrong place, digging it deeper isn’t going to help.” Seymour Chwarst

Too many young filmmakers are interested in the technique of film. It’s a red herring. What matters is what you have to say. When I started, Ken Loach told me, (when it comes to making a film) ‘Don’t ask how, just ask why.

Or: “No art is worth much which doesn’t aim to change the world.” Lindsay Anderson

Film is a contrivance, an illusion—each frame is a manipulation—sometimes artful, sometimes not. The term Cinema Verité is a misnomer—as if, in life, we are all followed around by a hand-held camera bobbing up and down, with a furry microphone and hand ‘basher’ light poking into our faces.

I always prided myself in that I could do any kind of movie. But looking at today’s movies, I struggle with asinine.

On every film you make you set out in search of ‘Rosebud’. It can be very elusive. 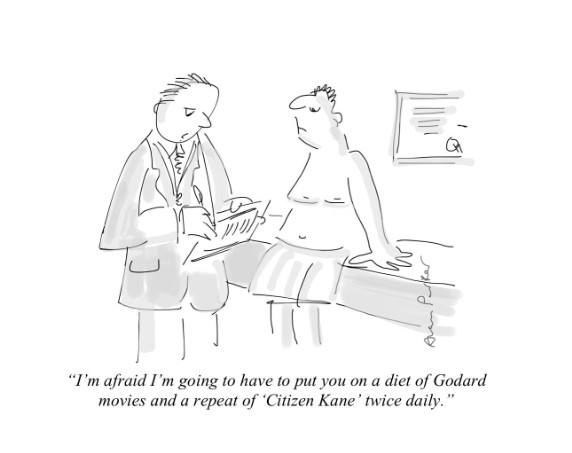 They say that good filmmaking is 90% preparation and also 90% spontaneity — capturing the magic of the moment. Math was never the film industry’s strong point. Especially when it comes to computing residuals.

Some elderly, once great, directors did the job too long until they toppled off the camera dolly with a heart attack.”
Or: “When you see those athletes hang on for one or two seasons too long, it’s kind of sad.“ Stephen Soderbergh. And: “You don’t retire from the film industry, it retires you.” Michael Cain

Filmmakers are an insecure bunch. Let’s face it, every year film schools turn out hundreds of new directors snapping at our ankles. Every year Hollywood agents make the pilgrimage to Sundance to sign up the fresh new talents. Most of these young neophytes are fiercely ambitious, many are malleable, some are talented and all are cheaper.

If you’re hot and talented, then a good lawyer and agent can be very useful. If you’re not, they’re not.

As a director you have to be very swift of foot. But avoid tap-dancing. Film crews hate that.

The scene on the ‘cutting-room floor’ is not just a discarded scene. It’s probably two long days of hard work, in the freezing cold and rain, that you didn’t have to do.

Before filming Pink Floyd The Wall, I said, rather romantically, that it would be like Livingstone going up the Zambezi. When the film was finished it felt more like going over Victoria Falls in a barrel.

Why my generation of filmmakers masochistically took to the streets, instead of the cozy, comfort of a film studio, is a mystery to me. But the very smell of a real place somehow makes the ‘make believe’ believable.

Daily call-sheets are always loaded with too much work to do — with that lovely phrase at the bottom “Time permitting”. On a film set, time never permits. No matter what the film is, there’s never, ever enough time.

It occurred to me during one particularly long and arduous day’s filming on Evita that we were working a fourteen-hour day, six days a week, sometimes seven, without a rest day, making a film about a woman who fought for a five day week for working people.

The blue Danube that bisects the towns of Buda and Pest is not blue, but brown. The food is a dreadful legacy of communist austerity and a more traditional cholesterol-packed Kamikaze dive into an early death.

No director really knows how another director works. Usually it vacillates between, cuddly, phlegmatic, avuncular, didactic and homicidal.
“Leave the gun. Take the cannoli.” Clemenza, The Godfather

In equal doses, it is an uplifting and sluttish profession.

The more money you get paid for a film the worse time you’ll have making it. Except afterwards, of course.

Or “Dali sleeps best after the day he receives a tremendous quantity of cheques.” Salvador Dali

First your film has to pass the test of critics. Then the test of an audience. Then, harder still, the test of time. It’s nice if your film still looks fresh, thirty years after making it.

Or: “Every great film should seem new every time you see it.” Roger Ebert