Introduction to David Ogilvy’s ‘Confessions Of An Advertising Man’

I first read this seminal book as a junior copywriter in the mid-Sixties. One of my first bosses was Peter Mayle (who went on to write some very successful books of his own). Peter had recently arrived in London from Ogilvy’s in New York and consequently Confessions of an Advertising Man, published in 1963, was required reading for all of us young turks in our button-down shirts and thick welted shoes who were brown-nosing our way to the best assignments. Ogilvy’s slender but juicy book was easy to read and eminently quotable as we spouted his words of wisdom in the elevators and toilets. To say it was our bible might draw Ogilvy’s opprobrium for ‘vacuous exhortations,’ but it certainly was the equivalent of the Little Red Book of Mao for my Sixties ad generation earnestly searching for what Ogilvy called “the ticket on the meat.”

We particularly liked the line, “When people aren’t having any fun, they seldom produce good work.” Peter Mayle, our interpreter of “the good book according to Ogilvy,” said that this meant “the mavericks”– the creative people – should indulge in long lunches in Soho. Indeed, one rarely repeated heretical Ogilvy nugget stated that, “People are more productive when they drink. I find if I drink two or three brandies, I am better able to write.” This of course became the mantra for an entire generation of advertising folk as we became better paid, along with the Sixties explosion, and traded in our Cortinas for snazzier models. After all, “Pay people peanuts and you get monkeys,” said Ogilvy. We loved that one.

I suspect that Ogilvy’s Turnbull & Asser shirts and puffing pipe were as much an egregious concoction as the man in the Hathaway eye patch he had made famous, but who could fail to be seduced by a little British narcissism fused with hard-nosed American, self-serving salesmanship. 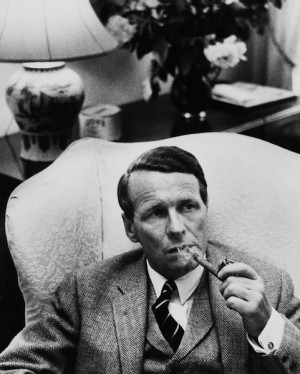 Famously stating that “ninety-nine percent of advertising doesn’t sell much of anything to anyone,” it’s easy to see how this book became such required reading when it was first published. Quoting everyone from Mencken to Churchill; from Savignac to Mikoyan; from P.T. Barnum to Aldous Huxley, Ogilvy, the (briefly) Oxford-educated Madison Avenue honcho, made advertising not only cool but also, for the first time, almost respectable.

Anecdotal, aphoristic and oozing with self-confidence, the pages of Confessions are packed with Ogilvy ‘commandments’ as he offers advice to everyone in advertising from the mailroom , to the clients. His own Hemingway-esque personal history — Paris chef to Amish farmer — was possibly as richly embellished as Commander Whitehead’s at Schweppes. He never lacked for self–esteem and his faith in his agency was absolute, as he talked-up himself and, consequently, the firm that bore his name: Ogilvy, Benson & Mather. (Note there’s no possibility of democratic alphabetical order with wily David.)

Looking back after four decades, his own ads probably look a little dusty, which is to be expected, but his broader ideas still fit the world in which we live today. Many of his oft-repeated words have become truisms in a more cynical age: Leaders grasp nettles; Don’t keep a dog and bark yourself; Hire people who are better than you are; You can’t save souls in an empty church…

Ultimately, this book is important because it’s not just about advertising, it’s also about how people think and behave at the sharp end of business — any business. In fact, one of the better known quotes isn’t specifically about advertising at all: “I admire people with gentle manners, who treat other people as human beings. I abhor quarrelsome people who wage paper warfare…I despise toadies who suck up to their bosses; they are generally the same people who bully their subordinates.”

As an Englishman interested in baseball, Ogilvy says: “Don’t bunt. Aim out of the park. Aim for the company of immortals.”

In the world of advertising, this little book has ensured him that company.